33. Read the words and match them to the correct festival. Some can match more than one festival

34. Write about one of the holidays. Use the words and word phrases from the table

1. When do British people have this holiday?

2. How do they prepare for the holiday?

3. How do they celebrate the holiday? What do they do?

4. Do you like the holiday? How do you celebrate it?

One of the most popular British holiday this Christmas. Christmas is celebrated in the UK on December 25.

For they Holidays decorate a tree, coloured lights and decoration, cook roast turkey and a special puddings and go to church. They a stocking full of present, send SMS to friends and relatives.

In November the British people have a special holiday - Remembrance Day. It is held on the second Sunday in November every year. On this day the Dritish wear a red poppy in memory of people who fought for their country during the two World Wars and died.

So Remembrance Day is often called Poppy Day. There are usually special services at war memorials and churches in cities, towns and villages all over the country.

At 11 o'clock on each Remembrance Day there is a two minutes silence in Britain. People remember those who died during the wars and conflicts and think how terrible war is. The Royal British Legion sells red paper poppies which people wear on their coats. Later, the money from the poppies is given to war  veterans.

36. Complete the text: make the word in capitals suitable for filling in the blank space

Meet Jessica. She is from Canada. Her family lives in Ottawa, the capital of the country.

Jessica and Mike are younger than David. David is a student. He studies at the university. He is going to become a doctor.

As for her second brother, Mike is 16 years old. He can play the piano, the guitar and even the drums. However, he doesn't want to be a musician. The children get on well with each other.

The last Sunday of August is their family went to the countryside for a picnic. The adults and children had a lot of fun. They have already their plan for next August. Next year, they will spend their family day at Niagara Falls.

37. Read the notes about different British special days. Match them with the pictures and write a short description of each event 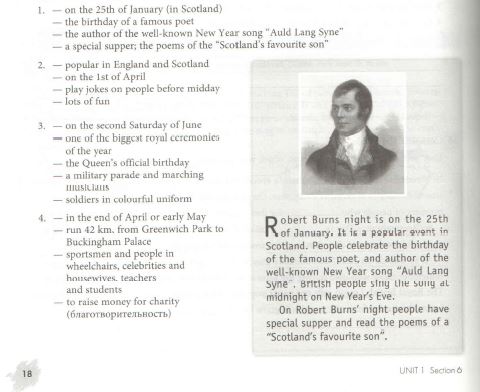 1. Trooping the Colour (or Carrying of the Flag)

Trooping the Colour is one the second Saturday of June. It is one of the biggest royal ceremonies of the year. This day is the Queen's official birthday. There is a big military parad. That day the British soldiers are in colourful uniform.

The London Marathon takes place in the end of April or early May every year. The participants run 42 km, from Greenwich Park to Buckingham Palace. Different people take part in the London marathon: sportsmen and people in wheelchairs, celebrities and housewives, teachers and students. The aim of the marathon is to raise money for charity.

38. Write about any special event in your region (city, town, village)

2. What is it dedicated to?

3. How to the people of your region celebrate it?

<< Section 5. An Englishman's home is his castleSection 7. Reading for pleasure >>