1. Read the text and say what happened in Trafalgar Square at night 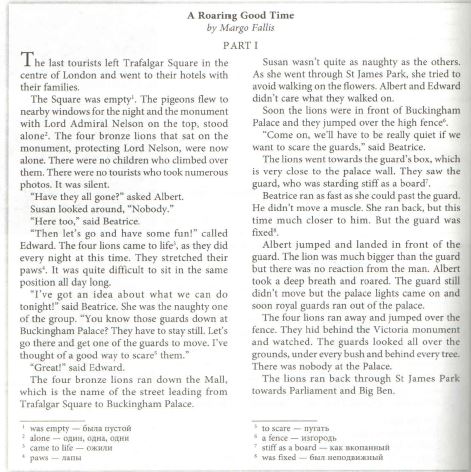 On this night in Trafalgar Square, in the center of London, lived four bronze lions. Their name was Albert, Beatrice, Edward and Susan. The four lions decided to go to Buckingham Palace and scare one of the guards. But the guard was not batting an eye

Tourists went to the hotels

Pigeons flew to the windows for the night

The four lions (Albert, Susan, Beatrice and Edward)ran down the Mall

Susantried to avoid walking on flowers

The guard at Buckingham Palace stood as stiff as a board

Albert roared in front of the guard

The four lionshid behind the Victoria Monument

The guards looked under the bushes and behind the trees

3. Say is the following are true or false

4. Look at the picture and describle the guard. Have you ever heard about the Changing of the Guards? Use the Cultural guide to learn more

Use: is wearing, black fur hats, a scarlet tunic with a black collar, black trousers with a red stripe, a white belt, black boots

The guard is wearing a black fur hat, a scarlet tunic with a black collar and black trousers with a red stripe. He also has a white belt and black boots on.

Nelson's guards came to life when the tourists left the square

The four lions decided to scare a royal guard

6. Tell the story from the point of view of a guard

Use: stand still at the guard's box, be dark, see a big lion, run quickly past me, stand in front of me, roar, be fixed, run away, the place lights, come up, run out of the palace, first, next, then, after that, finally

I stand still at the guard's box. On this night, it was dark. I see a big lion which first run quickly past me, next stand in front of me, after that roar. I was frightened but I had fixed. Then the place lights lion run out of the palace.

7. Read the text and say what places the lions visited after Buckingham Palace 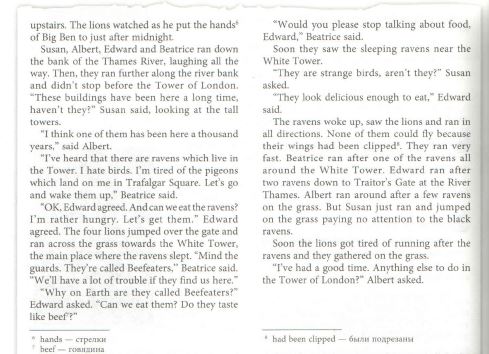 After Trafalgar Square lions decided a little hooliganism. They moved to the Big Ben time forward one hour. Then he decided to see the River Thames and take a ride on a boat. But they were too heavy and nearly drowned. Then, the Lions ran to wake the Tower of London of birds, because they hated them.

Susan suggested the clock ahead an hour

The groundsceeper went upstairs and set the clock back

Albert knew the age of the Tower of London

The ravens ran in all directions

Susan paid no attention to the ravens

The four lions went to Big Ben at midnight

2. Why did the groundsceeper decide that something was wrong with the clock?

3. Why does Beatrice hate birds?

Beatrice hated birds because she was tired of the pigeons. They often landed on her in Trafalgar Square

4. Why did Edward  talk about food?

Edward  talked about food because he was hungry

5. What didn't fly away when they saw lions?

The ravens didn't fly away because their wings had been clipped

6. Did the lions enjoy running after the ravens? Did they catch any ravens?

The lions enjoyed running after the ravens but soon they go tired. The lions didn't catch any raven

10. Put the sentences in the correct order

1. The lions changed the clock ahead an hour

4. The lions ran to the Tower of London

5. The ravens woke up and ran away

6. The lions got tired of runninf after the ravens

11. What do you know about Big Ben and the Tower of London? Use the Cultural guide to learn more

Big Ben is the nickname for the Great Bell of the clock at the north end of the Palace of Westminster in London, and often extended to refer to the clock and the clock tower. The tower is officially known as the Elizabeth Tower, renamed as such to celebrate the Diamond Jubilee of Elizabeth II. The tower holds the largest four-faced chiming clock in the world and is the third-tallest free-standing clock tower. The tower was completed in 1858 and had its 150th anniversary on 31 May 2009, during which celebratory events took place.

Tower of London, is a historic castle located on the north bank of the River Thames in central London. It lies within the London Borough of Tower Hamlets, separated from the eastern edge of the square mile of the City of London by the open space known as Tower Hill. It was founded towards the end of 1066 as part of the Norman Conquest of England. The White Tower, which gives the entire castle its name, was built by William the Conqueror in 1078, and was a resented symbol of oppression, inflicted upon London by the new ruling elite. The castle was used as a prison from 1100 (Ranulf Flambard) until 1952 (Kray twins), although that was not its primary purpose. A grand palace early in its history, it served as a royal residence.

12. Say what you think will happen next. Where will the lions go?

I think the Lions will want to continue to eat. Perhaps for that they will go to the baker or the butcher. And closer to the dawn return to their seats.

13. Read and say what places the lions visited 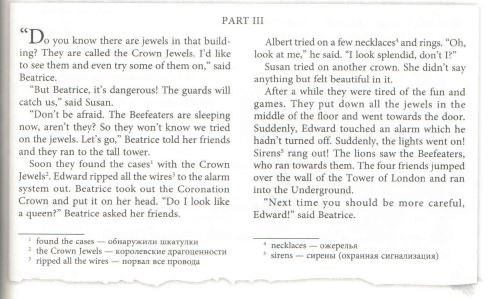 Lions climbed the tower. Edward ripped the wires of the alarm system. Beatrice tried on the crown, Edward took the royal skipitr. They have long played with the Crown Jewels. But Edward stumbled and tripped alarm. But the Lions managed to escape. Then they rode the subway, but that they did not like. As a result, they are tired and returned to their seats at the monument and had planned pranks on the following night.

1. The friends decided to see the Crown Jewels

2. Beatrice wasn't afraid of the guards because the Beefeaters were sleeping at night

3. Soon the lions were tired and they poot down all the jewels on the floor and went towards the door

4. When Edward touched the alarm, the lights went on. The lions saw the guards who ran towards them

5. On the Underground station Edward found half a bag of chips on the ground

6. The friends went into the train and rode around London for few hours

7. In the early morning the lions bathed in the fountain

8. After the fountain the lions took their places to meet tourists

15. Match the beginnings and endings of the sentences

1. The lions ran to the tall tower where Crown Jewels were kept

2. Beatrice was happy when she tried on the Coronation Crown

3. The lights went on when Edwards touched the alarm

4. The lions ran into the Underground because they wanted to get rid of Beefeaters

5. The lions got off at Charing Cross Station because it was time to return

6. The friends were ready to meet the tourists after the night full of adventures

16. Say what places the lions visited that night and what they did there. Use the map

Use: first, next, then, after that, finally

First, they went to Trafalgar Square and the frightened guard. Next fled to the Big Ben and the transferred time. Then we went to the River Thames and nearly drowned there. After that they went to scare the birds up to the tower, and played with the royal regalia, riding on the subway. Finally we bathed in the fountain, and returned to his seat.

17. Work in groups. Look at the list of British places of interest. Choose one of the places and say what the lions can do there next night