1. Computers and the Internet are two fasctinating inventions of modern technology.
2. According to Asimov, a robot must not do anything that conflicts with the three Laws of Robotics.
3. It is only a matter of time before there are robots that cook and clean in every home.
4. These days it is quite common for children as young as ten to have a mobile phone.
5. Many of the gadgets we see in films don't exist in reality.
6. There are many obstacles to overcome when trying to create a perfectly functioning robot.
7. In my opinion, the main problem with mobil phonesis that their buttons are too smail.


2. Match the words in the two columns. Then, use the phrases to complete the sentences. 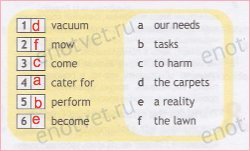 1. I need a robot that can mow the lown, because one of my chores is to keep the garden tidy.
2. There are many gadgets and machines on the market that already cater of our needs, but scientist promise that future robots will satisfy even more of our demands.
3. Robots in factories are there to perfom tasks that are dangerous or difficults of human.
4. Floors in homes will never be dirty again once there are robots to vacuum the carpets!
5. Should be trast robots to take on jobs where humans could come to harm if they made a mistake.
6. Do you think that robotic doctors will ever become a reality?

Do you think it is possible to have an emotional reasponse to a robot, such as love? Well, robot researches do! In a few decades, some think we may have household robots that look like humans, act likes humans and even talk using filgurative speech like humans! We will feel for these robots the way we feel about other humans and animals.

However, scientist probably need to create an artificial brain before machines are able to think, and this is no easy task. But if you doubt that this will happen, stop and think: who could have predicted 100 years ago that home computers and the Internet would exist?

3. thinking about sth carefully before reaching a conclusion
4. not natural, made by humans
6. the ability to produce original things, ideas, etc 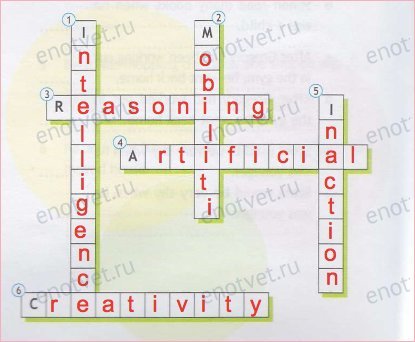