1. Complete the sentences with verbs derived from the words in bold in their correct forms.

1. The foreign actor is difficult to understand because he mispronounces many English words.
2. My art teacher saked me to redo my drawing because I had made some mistakes.
3. Don't underestimate the value of this painting; it's actually worth close to sixty thousand euros!
4. Citizens of the town worked together to rebuild the cinema that a fire had burnt down.
5. It would be wrong to oversimplify the novel by descriing it as just a love story, because it is about a number of themes.
6. I know you dislike Henry, but it was very rude of you to tell him that he's a bad photographer.

Alexander Sokurov is perhaps one of the most successful Russian film directors of all time and is particularly popular with fans of art cinema. He is best known for his film Russian Ark, released in 2002. Sergei Dontsov, who stars in the film, plays a stranger journeying through the halls of the Hermitage Museum in St.Petersburg. Sokurov creates a sort of dreamlike fantasy world in the film, similar to some films by Andrei Tarkovsky. Certainly, Sokurov is one of the finest film makers of our time.

1. A: Have you seen Bill recently?
B: Yes, actually. I ran into him yesterday at the library.

2. A: I think we should run through scene three one more time.
B: I agree. We need to be ready for our first perfomance tomorrow evening.

3. A: Is it true that you ran away from home when you were young to join the circus?
B: That;s not true. My parents actually worked in the circus.

4. A: Did you finish that landscape you were painting?
B: No, I ran out of blue and green, and didn't have time to go and get some.


4. Choose the correct word for each sentence. 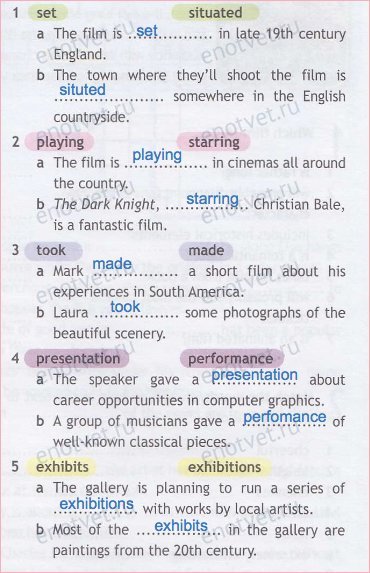