1. Read the text and say what Fraser, a fairytale dragon, did on Christmas eve 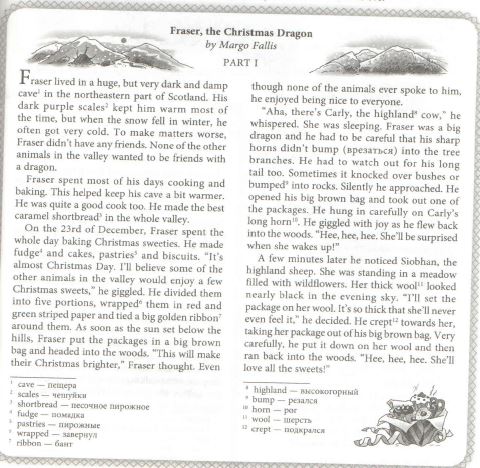 Fraser was on Christmas Eve alone. But he was not upset. He has prepared many delicious dishes and sweets, beautifully packaged in paper and put it in a brown bag. With this bag, he went into the woods and laid out gifts sleeping beast. He was very happy, what makes pleasant.

2. Look at the picture and say what Fraser looks like

The picture Fraser looks frozen. In his cave it was cold.

1. Where did Fraser live?

2. Fraser didn't have a lot of friends, did he?

5. Why did Fraser go to the valley with a big brown bag?

7. Where did Fraser leave his Christmas present for Carly?

8. Where did Fraser fing Siobhan?

9. Where did Fraser leave his Christmas present for Siobhan?

1. Fraser lived in a huge and dark cavein Scotland.

3. His hobby was cooking and baking. He was a good cook.

4. On the 23rd of December Fraser baked Christmas sweeties.

5. Fraser put Christmas sweeties in his big brown bag. He wanted to give sweet  Christmas presents to the animals of the valley.

8. Fraser found Siobhan, the highland sheep, in a meadow filled with wildflowers.

9. Fraser put his Christmas presents down on Siobhan's wool and then ran back into the woods.

4. Find in the text sentences, which prove that:

3. Fraser was kind and friendly.

5. Fraser was big and chumsy.

1. To make matters worse, Fraser didn't have any friends.

3. Even thought none of the animals ever spoke to him, he enjoyed being nice to everyone.

4. He giggled with joy as he flew black into the woods. "Hee, hee, hee. She'll be surprised when she wakes up!"

Very carefully, he put it down on her wool and then ran back into the woods. "Hee, hee, hee. She'll love all the sweets!"

5. Fraser was a big dragon and he had to be careful that his sharp horns didn't bump into the tree branches. He had to watch out for his long tail to. Sometimes it knocked over bushes or bumped into rocks.

5. Fraser lived in Scotland. Say what you know about this country

Use the Cultural guide if necessary

1. Scotland is a beautiful country. 2. There are a lot of lakes, mountains, rivers. 3. They are famous for its history. 4. One of them is Ben Nevis. 5. There are two famous lakes Loch Ness and Loch Lomond. 6. In Scotland 6 million people. 7. Glasgow on the Clyde.8. The flag of Scotland is white and blue. 9.Edinburg is the capital of Scotland , in Scotland most famous sports are golf football.

2. What did Fraser do in the morning?

3. What did he have for lunch?

4. What did Fraser do after lunch?

5. How did he spend his evening?

Tell your story to your classmates.

7. Read the text and say who Fraser gave present to 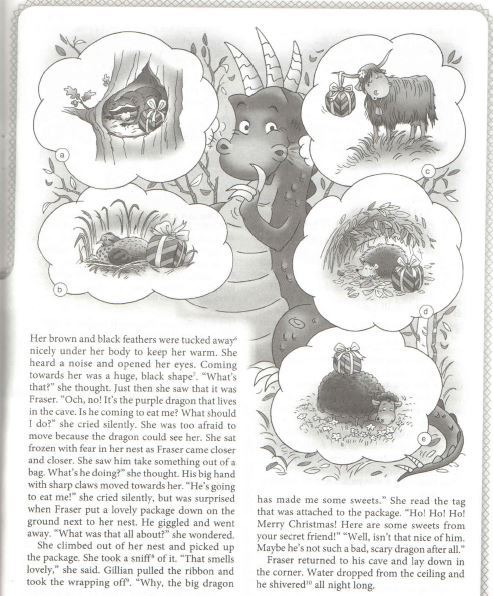 Then the dragon went to give gifts to a hedgehog and a raccoon. He laid them quietly while sleeping beasts.

Then he decided to congratulate grouse. But grouse woke up and thought, now Fraser tear it apart. But the dragon gently put a gift by the tree and went into his cave. A grouse came down and wondered why the dragon brought him sweets. "Maybe he's not a bad" - thought the bird.

Fraser returned to the cave and shivered all night from the water drips from the ceiling.

8. Match the names and the characters

1. Fraser decided to give presents to the other animals

2. Rabbie slept in an oak tree

3. Fraser bumped into a branch with his horn

4. Harry slept under a bush

8. Gillian was frozen with fear

10. Fraser was cold all night

10. Read the sentences and say whether they are true or false

1. False. Fraser nearly bumped into a branch with his horn. He didn't wake up the raccoon.

3. False. Fraser  nearly heart the hedgehog as he went trought the forest. He didn't even wake up the hedgehog.

4. False. Harry, the hedgehog, was sleeping when Fraser put the present down in the bush.

7. False. There was a tag : "Ho! Ho! Ho! Merry Christmas! Here are some sweets from your secret friend!"

Gillian sat frozen when she saw Fraser because she was affraid of the dragon.

Fraser put his presents next to the sleeping animals because he wanted to make a Christmas surprise for them.

12. Look at the pictures. Put them in the right order

13. Tell this part of the story as if you are of Fraser

Use: saw a raccoon, nearly bumped into, put the package in a hole in the oak tree, went quietly, nearly hurt a hedgehoh, put a package in a bush, had one more package in the bag, saw a grouse in her nest, put a package next to the nest, was happy to give all the presents away, to return to a cold cave

I went through the woods. I saw a raccoon, nearly collided with him, but in time remarked. I gave him a gift in the double oak. Then I went to see a hedgehog, a gift left right in the bush under the foot. He immediately notice the wake. Then I put the bag of candy next to a happy hazel grouse and left in a cold cave.

14. Say what you think will happen in the third part of the fairy tale

I think more a hedgehog tell everyone that the gifts presented to all the dragon. And they decide to go to him to say thank you. And then they become friends and have fun Christmas.

15. Read and say what Christmas present Fraser got 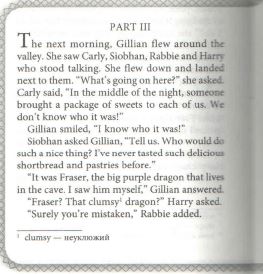 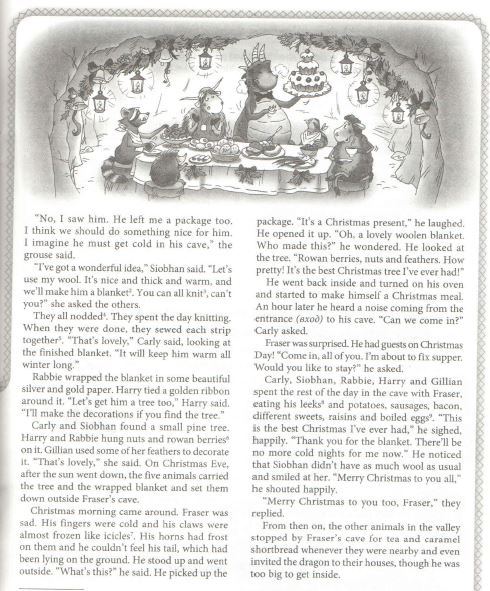 Fraser received for Christmas a big blanket from the inhabitants of the forest. On Christmas Eve, all the animals came to the cave to the dragon and had a great holiday! And then they always visited each other's homes.

2. "I've never tased such delicious shortbread and pastries before"

4. "I'll make the decorations if you find the tree"

17. Match the beginnings and endins of the sentences

18. Arrange the sentences in the correct order. The first one has been done for you

2. They took wool from the sheep and made a warm blanket.

3. The animals found a pine tree and decorated it with nuts and berries.

4. Fraser went out of the cave and saw a present and a Christmas tree.

5. He cooked a Christmas meal in the cave.

6. The guests spent the whole day in Fraser's cave.

7. The dragon found some real friends.

19. Tell this part of the story as if you are Fraser

Use: gave Christmas presents to the animals, returned to the cave, fell asleep, was cold, couldn't feel the tail, went out of the cave, saw a big wrapped present and a nice Christmas tree, opened the present, a warm blanket, began to cook Christmas dinner, had guests on Christmas Day, had a real Christmas, wasn't cold during winter nights any more, made friends with the animals of the valley

I handed out Christmas gifts to animals and back to the cave. I fell asleep and woke up the next morning frozen.I do not feel the tail. I came out of the cave and saw a large wrapped gift and decorated Christmas tree. I opened the gift, there was a blanket. I am very happy! He returned to the cave and started to prepare Christmas dinner. In the evening guests arrived. We had a Christmas present!
I made friends with the animals of the valley, and I was no longer cold winter nights under a warm blanket.