1. Match the words to form collocation. Then use them to complete the sentences. 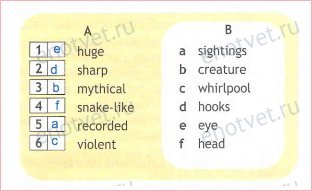 1. The unicorn is a mythical creature in Greek mythology.
2. The Kraken sea monster creates a violent whirlpool when it dives back into the ocean.
3. There have been many recorded sightings of a strange ape-like creature in the mountains of southem California.
4. The sharp hooks on the tentacles of the giant squid can cut deep scars into a fisherman's skin.
5. People who have seen the Loch Ness Monster say it has a long, slender neck and a snack-like head.
6. In Greek mythology, a Cyclops was a giant with one huge eye in the middle of his forehead.


2. Underline the correct them.

1. The sailor only caught a quick glimpse of the beautiful mermaid before she dived back into the sea.
2. The knight hid behind a rock and started in wonder at the fire-breathing dragon.
3. The chaild said he had spotted a strange creature in the sky, with the head of an eagle and the body of a lion.
4. The children decided to go in search of the Loch Ness Monster.
5. The true reason why dinosaurs became instinct remains a mystery.
6. The plesiosaur is a dinosaur species that existed millions of years ago.
7. Investigators are still trying to find out what type of animal the skeleton they discovered belongs to.

The Myth of the Minotaur.

In the Mediterranean Sea, tho the south of the Greek coast, lies the island of Crete. According to the legend, in ancient times, a creature called the Minotaur lived there. Half-man, half-bull, the Minotaur was truly horrifying. The king of Crete, Minos, kept the Minotaur in a maze which had many mysterious, twisting passages. Every nine years, the King of Athens sent fourteen children for this strange-looking monster to eat. Theseus, an Athenion hero, took a magic ball of thread into the maze with him, he foun the Minotaur, killed it with a sword, then found his way out of the maze using the thread to retrace his steps.
<< Уголок переводчика 3b >>