1. Put the adjectives in brackets in the comparative or superlative form. 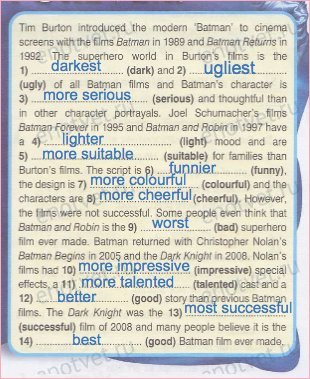 1. The author's new book sold out very fast.
2. They wanted to buy a sculpture from the exhibition, but it was rather expensive.
3. It's absolutely impossible for me to finish this book in two days; it's huge!
4. The acting in this film was totally perfect.
5. They are rather worried that they will be late to the opening of the art show.


3. Use the correct adjective/adverb from the list below in the correct form to complete the sentnces.

1. Out of all Leonardo da Vinci's paintings, the Mona Lisa is probably the one people know the most.

2. Can you try to describe the picture a little more accurately? I'm still not sure which one you're talking about.

3. This is by far the worst concert I've ever been to. It is far too crowded and the sound is terrible!

4. You may find it difficult now, but with a little more practice, you'll be able to paint Landscapes more easily.

5. Now that he's had a few lessons, Jason can play the guitar much better than a few weeks ago.

6. Jake has started his school exams, so now he has much less time to spend on his favourite hobbies.

1. Stunts in adventure films today are becoming more and more dangerous than in the past.
2. The more talented an artist is, the more chances he has of becoming famous.
3. I think jazz is rather interesting, but my friend Sophie insists that reggae is a lot better than jazz.
4. The film Happy Feet wasn't as adventurous as the film Madagascar, and also Madagascar was much funnier than Happy Feet.
5. Pam's voice is slightly better than her sister's, but she doesn't feel very comfortable singing in front of others.
<< 5b5d >>