1. Fill in the gaps in the text with the following words.

For an evening at home, Armageddon is action-packed film that will have you on the edge of your seats! The all-star cast, which includes Bruce Willis, Ben Affleck and Liv Tyler, all give incredible perfomances. The film has an interesting plot. A team of scientist tries to save the Earth from destruction, and there is a moving twist at the end. What's more, there is great camera work and the special effects are stunning. This film was a box office success when it came out and offers thrills and excitement for all in the family. A must-see!


2. Match the idioms in column A to their definitions in column B. Then use them to complete the sentenes. 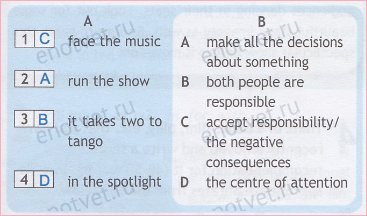 1. James says that only Natasha is responsible for the situation, but it takes two to tango.
2. Why do you always want to in the spotlight? It's not fair that you are always the one telling everyone else what to do!
3. To be a famous celebrity you have to love being run the show.
4. I believe that Evelyn should just admit that she is the one who caused the problem, and face the music.


3. Read the texts and choose which type of film they describe from the words below. 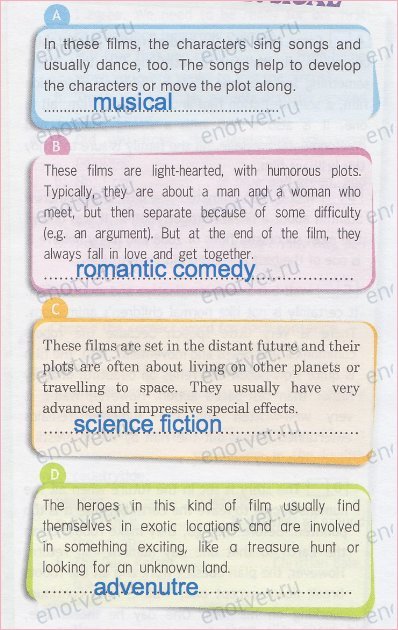 2. A: Do you want to read this magazine after me?
B: No thanks. I rarely read magazines. I prefer reading newspapers.

3. A: How about going to a film tonight?
B: I'd sooner go out to dinner than go to a film.

4. A: D you want to start learning French with me?
B: Not really. I'd prefer to learn Italian rather than learn French.
<< 5c5e >>