1. Read what each person says and report their words.

2. Doug Murray, a rescue worker, was interviewed yesterday by Jill Smith, a local journalist. He was asked the following questions. Turn them into reported questions. 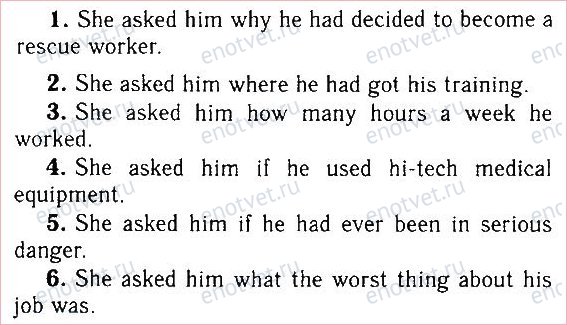 3. Rewrite the second sentence to mean the same as as the first. Use two to five words, including the word in bold.


4. Fill in the blanks with some, any, every, no and their compounds.

Someone once told me to never be afraid of trying new things. I had never tried anything daring, so when I had the opportunity to travel to a foreign city I took it. Paris was nothing loke my hometown. I spent most of my days visiting the museums and seeing the sights. The people were extremely friendly. I didn't meet anyone who wasn't nice. There were so many beautiful cafes and shops everywhere around the city. Paris is a very exciting city and there is always something to do. I loved everything about the city of lights!


5. Match the sentences to the correct qiustion tags. 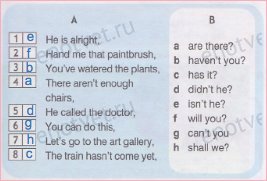 1. The teacher told me not to leave before she spoke to me.
2. The perfomance starts at eight, doen't it?
3. Dad promised to be at the train station when we arrive.
4. After the accident, the police asked us if we were hurt.
5. I've looked for my book everywhere, but I still can't find it.
6. The band told us they would perfom as the park on Saturday.
7. Let's take a drive to the country, shall we?
8. The mechanic said there was nothing wrong with the car.
<< 8hУголок переводчика >>